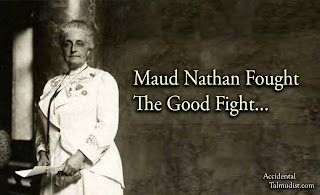 Maud was born in 1862 to a distinguished Sephardic Jewish family with a long history in America. Her cousins included Supreme Court Justice Benjamin Cardozo and poet Emma Lazarus (“Give me your tired, your poor…”). Maud was a proud member of Daughters of the American Revolution.

At age 17, Maud married her 35 year old first cousin Frederick Nathan, a successful stockbroker. Friendly and charming, Maud was a popular figure on the New York social circuit. She was the life of the party and enjoyed entertaining friends with her beautiful voice.

Maud and Frederick doted on their only child, Annette. When Annette died at age 8 in 1895, Maud’s heart was broken. Her previous life of wealth and parties suddenly seemed empty. This tragic event marked a turning point in Maud’s life. She realized that the only way to give her life meaning was to improve the lives of others.

A friend, Josephine Shaw Lowell, was the founder of the New York Consumers League, formed in 1890 to improve the working conditions of shop girls. At the time, female clerks in New York worked 60+ hours for $2.50 a week in filthy conditions. They endured frequent sexual harassment from both employers and customers.

Maud made use of her large social network to publicize the terrible working conditions for shopgirls. Maud eventually became president of the Consumers League and served for 21 years.

As a pioneer in educating consumers, she created the famous “white list,” naming stores and factories that met her high standards for wages and conditions. She encouraged the public to patronize these businesses. Maud believed that consumers had a responsibility to treat store employees with kindness and respect.

Every Christmas, she placed ads in New York newspapers urging people to shop early and carry packages home themselves, in order to make less work for the clerks.

In the late 1890’s, Maud went to Albany, the state capital, to lobby for better conditions for working women. She was frustrated to find that since women couldn’t vote, legislators were uninterested in helping them.

Maud’s mission grew to include the fight for women’s right to vote.

Her husband Frederick shared his wife’s views, and he led the Men’s League for Equal Suffrage and marched in the first suffrage parade. Newspaper accounts referred to him as Mr. Maud Nathan.

In 1897, Temple Beth-El invited Maud to give a speech about “The Heart of Judaism” in place of the rabbi’s sermon. This was the first time a woman played such a prominent role in an American synagogue service.

As director of the Hebrew Free School Association, Maud taught English to Jewish immigrants. She also worked as a social worker advocating on behalf of child workers, becoming an important crusader against child labor in America.

In 1920, the 19th Amendment was ratified, granting the vote to women, and Maud was finally able to fulfill a lifelong dream by casting her vote. She died in New York in 1946, at age 84.

For rejecting a life of ease to advocate for working women and children, and fighting the good fight for female suffrage, we honor Maud Nathan as this week’s Thursday Hero at Accidental Talmudist.

I'm glad you did, G. I wouldn't ever have know about this awesome woman otherwise. Thanks!

Thank you for inspiring us with this wonderful woman!

ALOHA I'm SO glad to be back online!
ComfortSpiral