Be sincere; be brief; be seated.
-- Franklin D. Roosevelt

Posted by Maggid at 3:06 PM No comments: 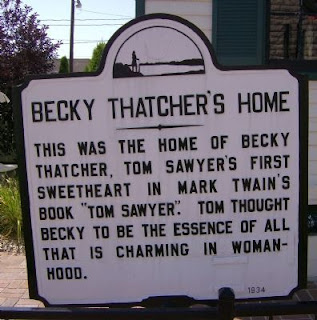 This evening I get to sing the part of Becky Thatcher - just doing some scratch tracks so an actress will have an easy time learning her part. The songs were written by my good friend Steve Givens . . .

Love & Love,
Your 21st Century Maggid
Posted by Maggid at 1:07 PM No comments:

One of the most important ways to manifest integrity is to be loyal to those who are not present. In doing so, we build the trust of those who are present.
-- Stephen Covey, 7 Habits of Highly Effective People
Posted by Maggid at 3:05 PM No comments: 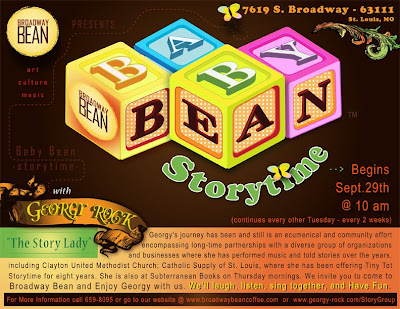 Posted by Maggid at 8:26 AM No comments:

Ach! I'm just a little busy (isn't that nice) -
the lady who needed a "new life" certainly hit the jackpot.

Here are two quotes that made me smile this morning.

"It is better to wear out than to rust out."
-- Bishop Richard Cumberland

Of course, this quote is wonderful. It reminds me of all the times I said I needed a new life because I loved the first one so much I wore it out. Maybe like an old teddy bear . . but, that's a story for another day . . .

"Gardens and flowers have a way of bringing people together, drawing them from their homes."
-- Clare Ansberry, The Women of Troy Hill

Although, I have to add "Choirs" to the list - because right now the CRC Choir is singing for the services at the Chase . . . . (wow-eee color me the happiest alto in the world.)

I wish New Life to You,
Sweetness in the Times Ahead

Thursdays at 11:30 . . . Story time
There was a quiet moment at Family Service a few weeks back, and a parent asked if i would consider a story time in their neighborhood. She even suggested two places - the first (best) is Subterranean Books - saying, "you know, the only bookstore left in the neighborhood. "
(Isn't THAT the truth?)

Well, thanks to Kelly, it's happening - every Thursday - 11:30 - (right before lunch, hm?)
We've been given the cutest, coolest space, upstairs, where the world looks like magic.
Come on up and join us, please. 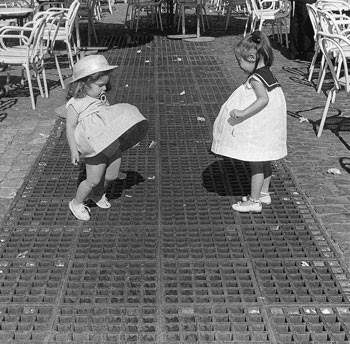 Posted by Maggid at 6:59 PM No comments:

nine eleven - and always - i love you

The time to repair the roof is when the sun is shining.
-- John F. Kennedy

Some think it's holding on that makes one strong; sometimes it's letting go.
-- Sylvia Robinson

That before was blasted to bits

There are untrained beasts lurking in the debris
Waiting to take anyone who tarries there . . . .
We can no longer afford to stay

Now i find myself in good - NO STELLAR Company

Wild beasts? Either tamed, or left to the heap -
They belong to another light, I suppose

For me - for the rest of us
We move Higher -
Learn of even Greater Beauty
We Heal - and Love One Another
We sing our songs, tell our stories,
and yes,
We make this a much
Better World

There is no revenge so complete as forgiveness.
-- Josh Billings

Posted by Maggid at 1:49 PM No comments:

I am here for a purpose and that purpose is to grow into a mountain, not to shrink to a grain of sand. Henceforth will I apply ALL my efforts to become the highest mountain of all and I will strain my potential until it cries for mercy.
-- Og Mandino

Well, I'm not into the "Highest Mountain of All" - But, certainly the Best Mountain I can be . . . (I AM a 'mountain kind of girl' after all.) Right now I get to "grab the cookies & go." By the way - they are Schnucks Brand - Chocolate with Chocolate Frosting type sandwich cookies . . and I'm telling another story from my ever growing "Peace Collection." Then, off to my second Wednesday Class . . . It's gonna be "The Best Day Ever!" . . (to quote Sponge Bob Square pants)

Happiness To You All -
BE WELL
Love & Love,
g

I'm a great believer in luck, and I find the harder I work the more I have of it.
-- Thomas Jefferson, (attributed)
Posted by Maggid at 12:10 AM 1 comment:

Beginning - every story has one 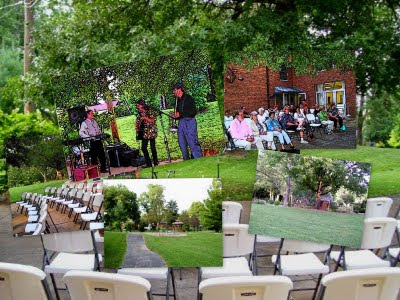 I took a few photos as we were setting up.
It was such a beautiful evening, we could work outdoors. Once they were there, the musicians started, maybe 15 minutes early, just because they couldn't resist playing under that huge oak tree. I got one picture of the early arrivers - then it was time to "get to work." People continued to parade down the walkway and staff scrambled to line up more and more chairs.
Thank you to EVERYONE for the Best Beginning Ever!
Love & Love
Your 21st Century Maggid
Posted by Maggid at 8:52 AM 1 comment: 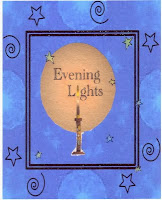 I just watched a documentary about Swaziland. It was well balanced, or at least in my opinion it offered thoughts from several perspectives. I know nothing (much) about the politics of this or any people . . and it wasn't my personal focus as I watched. Instead, I could understand better "our story." I continue to think about the ancient tale of a people who had been planted in a land because there was famine in the world. They had a family member who encouraged them all to move - therefore their lives were saved. But, 400 years later, these same people felt marginalized. They felt they lived in a "Narrow Place" where they had few options offered or available to them. A plan was put in place for anyone interested to join together and create a new identity. They could become responsible for themselves - they could be FREE.

We learn, through the story, and later we learn through our own lives that Freedom isn't easy. It's full of possibility, yes . . . . but it certainly is a lifelong lesson . . . .

I don't say everyone should view the documentary. I just say it gave me a fresh, new perspective on the story we will share this month at Evening Lights. For us, it won't be difficult, (as it certainly must have been in ancient times - and certainly is in Africa.) Nope, we have good music, lots of laughter and singing, stories and cake - all of us together . . . now that's "Evening Lights" - brilliant as the night sky. 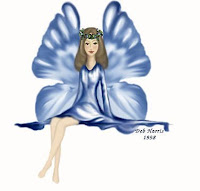 I only know the names of two angels, Hark and Harold.