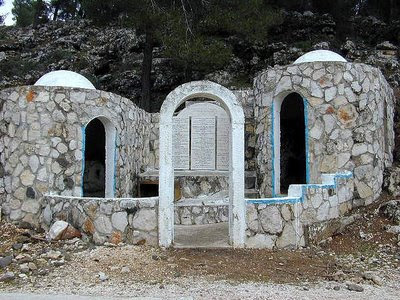 Today is the day to celebrate Shimon Bar Yochai (Simon, son of Yochai.) I have shared so many stories about him in the last few years, you would think we were related. I admire him for a lot of reasons. One of the things he managed to do is compile a body of work we call "The Zohar" (book of Splendor.) That's the basic course of study that inspired most of the metaphysics common in our philosophy. Pretty Amazing.Even more amazing when you remember he was in hiding for much of his adult life. Shimon Bar Yohai lived in the second century (common era.)
He was a Jewish teacher, prophet and one of the voices against Roman Rule. I am not the sort of person who can share much about politics - but, here is something I can understand.

There was once a huge Prophet School with thousands of students. Almost everyone in this special school was wiped out. The beloved teacher managed to survive and eventually found five students to teach, one of them was Shimon Bar Yohai. It became natural to speak out against the slaughter.

So, Shimon Bar Yochai traveled extensively (staying ahead of his enemies) and studied with any scholar he knew about. He hid in a cave for many years, because he needed to hide from the enemy, BUT the massive work of saving the teachings happened during that time. Shimon Bar Yochai had a fiery temperament, by the time he emerged from his hiding place, he was a fulfilled realized spiritual presence who could spend the rest of his years in the sun, sharing Truth with his friends.

On the day of his passing, the sun continued to shine until he had traveled from this world to the next.

Today is the celebration of Shimon Bar Yochai's terrific gift to the world. Of course, many of us have been celebrating for a couple of days. Tonight there will be candles and fires lit in remembrance. Songs will be sung and stories told.

I think I want to remember two things this morning.
One, that if our enemies knew that Brilliance occurs from their attacks, they would back away and leave us be. Without the pressure, we might be satisfied and not find our higher best.

Two, Shimon Bar Yochai wished he could be better recognized. He was told it should be enough for him that God, his teacher and one other person recognized his work. Perhaps being famous is an impediment. Maybe doing what is right, keeping it between us & God, is more than enough.

Oh, the picture? It's a photo of the place Shimon Bar Yochai and his friends studied together.
He ended up with a close group of friends. Together they studied, prayed, shared, healed, sang, and, even though he never knew it - they all went on to change so many hearts that I am here today, in the 21st Century, sharing with you. I'll be joining in the songs and stories around a campfire this evening.

God had him covered.
It was enough.

Very cool! What a great history - a great, thoughtful history! - to assemble.

I feel so enlightened, I never knew. I learn so much from you my friend. Peace, Carol