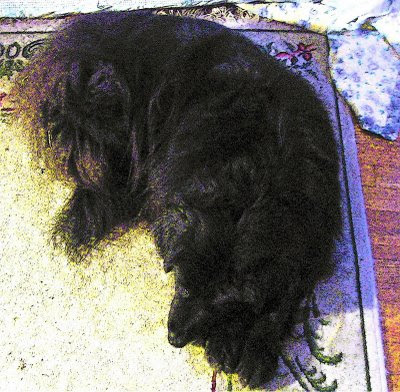 She doesn't like having her picture taken.
She's only about 80 pounds.
if i know someone is a "dog person"
I joke and tell them she is a "teacup newfie."
There isn't such a thing, it's a joke.

We were introduced right after Budmire went to heaven. The people taking care of her hoped beyond hope that we would like each other. She had been rescued from her past, but then she had so many issues that they were finding it impossible to place her in a forever home.
They thought, perhaps I was her last hope.

So, they call her a rescue dog. But I often wonder who was saved. Who exactly was rescued. She certainly came to keep me from having a broken heart.

She worked in an office with me when I was earning tuition money.
So, we insist she is "Professional."
Sometimes i call her "Rehearsal Dog"
because she waits patiently while we run tunes.

She was a real trouper last night because there was a house full of musicians and instruments. She made each person feel right at home. She learned the full range of a trombone and did not flinch, showed no fear. (A room full of horns and she did not howl.)
So, she has now graduated to full tilt rehearsals. pretty amazing. 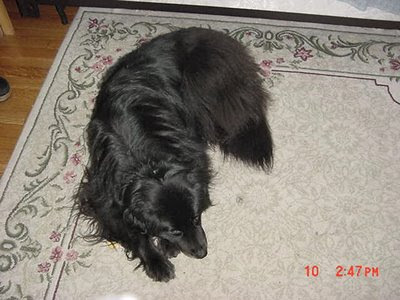 I sing to her all the time.
Everyone who knows her knows how to sing her name and proclaim
"She is a lovely girl."

Oh how sweet! Thank you for sharing that! Now I have the names and history all straight. I believe after reading that you rescued each other. Pets are a gift from God that brings us joy and we take care of them. But who is really taking care of who?

Riley is still, STILL very drugged. My vet said his breed Lhasa Apso holds on to the anesthetic longer than other breeds. Which I guess is good as he needs his rest to heal.

I am fine, thank you for asking. Happy it is Friday.

Have a day filled with blessings! Love, Carol

awww sweet ms osa! i remember when you first got her and brought her to church, she was so shy! but always such a sweet dog! you both seem pretty lucky to have one another if you ask me! happy friday to you! :)