Aye-yi-yi - i went to check on "the Box" - do you remember? It's the BBC project - tracking a cargo container for a year. Right now it's in the middle of the Pacific. I mean it, there aren't any land markers on the map at all. It's headed towards Los Angeles - I hope everyone on board is safe and warm. I hope they have calm seas. Isn't it funny how we never consider things like that until we make a point to pay attention. If we haven't a person out there, we don't think about how "stuff" gets to us.

"Lord, the sea is so big and my boat is so small." Did you ever learn that poem when you were little???

Creativity is allowing yourself to make mistakes. Art is knowing which ones to keep.
-- Scott Adams
Posted by Maggid at 2:16 PM No comments:

I have a lot to share with you - but, for now - this quote will have to do:

Remember me going on about "the box?" I'm talking about the BBC experiment of adopting a cargo shipping container and following it for a year. My first surprise was how l-o-n-g it takes to get from place to place. It started out in Great Britain (of course) with a load of whiskey to take to China. It finally arrived and unloaded - then it was filled with clothing (it's called 'consumer goods' now, so - maybe there's more than clothes, I don't know.) The container left Shanghai on November 18th - and, right now, as i type, it's in the Pacific Ocean (looks like somewhere I WOULDN'T want to be - way past Japan - headed towards the California side of the United States.
I'm thinking of the crew members on board. Where will they be? Do they celebrate Holidays this week? Do they miss their families? Will they be warm enough?

I'm enjoying the Box Project - But, I find myself caring about all the people.

Beautiful Monday Everyone!
g
Posted by Maggid at 9:23 AM No comments:

a morning gift from Pops:

a little bit of cheer.
Posted by Maggid at 11:02 AM No comments:

Without friends no one would choose to live, though he had all other goods.
-- Aristotle, Nichomachean Ethics
Posted by Maggid at 10:37 AM No comments:

Everywhere I go I'm asked if I think the university stifles writers. My opinion is that they don't stifle enough of them. There's many a best-seller that could have been prevented by a good teacher.
-- Flannery O'Connor
Posted by Maggid at 8:05 AM No comments:

In the end, we decide if we're remembered for what happened to us or for what we did with it.
-- Randy K. Milholland, Something Positive Comic, 06-29-06
Posted by Maggid at 9:31 AM No comments: 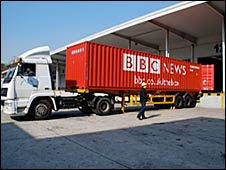 The Box is in Shanghai, it's been loaded with clothing and, guess what????
It will be on it's way to the U.S. - sometime this month (November.)
Maybe one of your will see it and take a picture.

If you do not wish to be prone to anger,
do not feed the habit; give it nothing which may tend to its increase.
-- Epictetus

On Thursday (November 13th) i was on the way home from class.
Our bus stopped for a gentleman,
silver headed, good quality shoes with the soles splitting in two.
He was noticeable because he was lifting a bicycle
up onto the bike rack on the front of the bus.
(It always seems to me you need to be pretty strong to do that.
There was a much younger man at the stop
who must have thought something similar
because he stepped up to help the gentleman.)
It took a little time to get it accomplished,
then the gentleman boarded and we were off,
traveling down the road - headed towards my stop,
maybe three quarters of a mile away.
The gentleman handed a transfer to the driver.
The driver looked at the piece of paper
and realized it was for sometime last October -
not Valid.
The gentleman continued to look in his bill fold
for another, proper piece of paper.
By my stop, the valid transfer or form of fare had not been found.
I'd already gotten off but, since the bus was not moving,
waited to see if I was needed.
I always carry an extra pass.
I purchase my monthly pass and an extra day pass - just in case.
(You never know when there might be an opportunity to help someone.)
I started to pull the fare from my pocket, when I saw, on the bus,
about five people walking up to the front of the bus with bills in their hands
(you could see it all in black and while through the front windows.)
I knew the gentleman was well provided for -
so i waved good-bye and walked the rest of the way home.

"We must be willing to get rid of the life we’ve planned,
so as to have the life that is waiting for us." 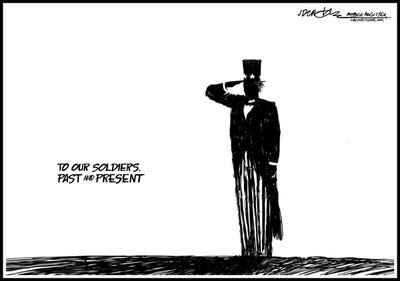 Posted by Maggid at 8:31 AM No comments: 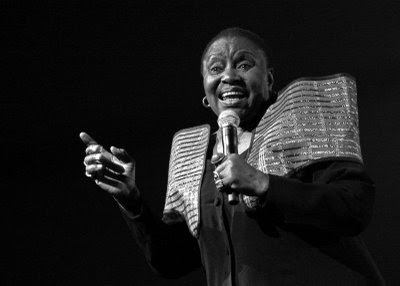 My heart is pounding in my chest - it's hard to say good-bye
In exile, you loved us all
and lifted your voice to free your people
I'll remember you
I'll lift my voice, too
I'll remember the Mother who sang Children to Freedom
I'll try to do the same

Love to you,
from one of the children who listened.

Happy Journey Ahead of Us

Love,
the note
Posted by Maggid at 3:41 PM No comments:

We have too many high sounding words, and too few actions that correspond with them.
-- Abigail Adams, letter to John Adams, 1774

Posted by Maggid at 5:36 PM No comments:

A Brilliant Gift from my Study Buddy 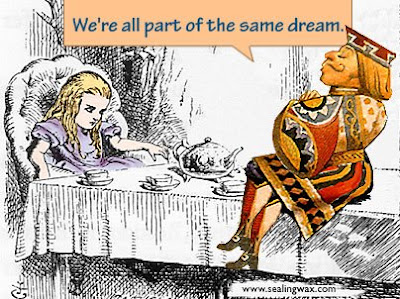 It's from a new site, I'll learn about it and share later -
but, i love this gift so much - I just had to share it with you.
g
Posted by Maggid at 5:14 PM No comments:

If someone says that I have nothing, it's true.

But if they say that I lack anything, it's false.

I think I would have liked Zusya. Many of his stories sound a lot like me. This is one of them.

Posted by Maggid at 6:12 PM No comments:

Posted by Maggid at 8:01 PM No comments:

Here is an interesting quote. It appeals to me -
I wonder what you make of it . . .
Here goes:

To accomplish our destiny it is not enough
to merely guard prudently against road accidents.
We must also cover before nightfall the distance assigned to each of us.
- - Alexis Carrel

Posted by Maggid at 9:26 AM No comments:

Posted by Maggid at 8:07 AM No comments:

"From this point forward, I commit myself to seeing the good in all others, and to finding the decency and generosity in those who disagree with me, and to keep that in front of my consciousness even as I continue to disagree with the paths that they have chosen - and let that understanding give me even greater energy to act for the causes of social justice and peace."

It's been a while since I traveled the nation, schlepping CDs, equipment, guitars and stuff - driving long, quiet distances, having conversations with the Divine. The last few years, I've "suddenly understood" something, in the shower. Not so romantic, I suppose, but it must be the "quiet enough" place - where the new idea can "get through." Color me surprised that now I have fun with ideas while traveling by city bus.

Okay, you know me - just color me having fun and leave it at that.

Anyway. Our class has a reading assignment for this week. I didn't like it. i wanted to travel back in history and kick the author in the chins. Part of my distress is that I mis-understood some of it and part was because the entire story wasn't represented and, you guessed it, part of it i STILL don't like, but I don't care that I don't like it anymore.

Because, my wonderful study partner, sent me the "rest of the story."
I found something else in the story that captured my imagination
and it's had me giggling for a couple of hours.

The story is about the time Moses saw the Burning Bush, right????
When Moses figured out Who it was/is talking to him, he "hid his face."
Later, when Moses wanted to see the Face . . . it wasn't so easy, right???

The story I'm reading suggests, if Moses HAD looked the first time -
he would have seen & understood everything.

I hear from people they would be afraid to look, too.

It would have been marvelous.
The Face of the ONE who loves us - really LOVES us.

Then, right there in downtown Kirkwood, on my way to the Post Office,
I picture Moses looking up -
and the music video as we see the Look of Joy, Perfection and Limitless Love on his face -
and the sound track (which is what made me laugh)
was a tune from an old group (I think the "Monkeys")

It's called "I'm A Believer"

I thought Love was only true in fairy tales, and for someone else but not for me
Love was out to get me,( da-da-da-da) that's the way it seemed
Disappointment haunted all my dreams

If he had looked the first time,
would it have been easier to accomplish his mission?
I dunno

the song is still playing out in my imagination

"A man is free only when he has an errand on earth."

it's from a much longer quote by
Rabbi Abba Hillel Silver (who blesses us still.)

Posted by Maggid at 4:15 PM No comments: